No one knows her real name. Miss Lance is the only known identity of the freelance adventurer known for her ability to pull off the impossible and make it look easy. Her fee is negotiable, and is not always in the form of money. Sometimes she works for a return favor, or for objects. If you have a problem and you’ve exhausted all avenues, it’s time to call in the Freelancer.

The reviews are in! Freelancer is a hit!
"Bobby Nash has given us an excellent introduction to a totally new Modern Pulp character."
"Fast paced, action packed, and fun!"
"The most impressive about this story is it's tight plot. There is not a wasted moment."
"Amazing new character!"
"Excellent read!"
"Great plot and plenty of action!"
"A fun adventure story!"
"For fans of spy-styled action, this story is a must!"
"Do yourself a favor and pick this up!"

FREELANCER “THE TRAVELER SANCTION”
An action/thriller

After rescuing the daughter of the Secretary of Defense of the United States of America, The Freelancer fears that her client is still in danger. What did the kidnappers hope to gain by taking the daughter of a high-ranking government official? Are they coming after her again? And what lengths will they go to reach their ultimate target, the man code-named Traveler-- James Montgomerey, the President of the United States of America.

Freelancer began with a short story for Pro Se Productions' now defunct Single Shot Signature Imprint. The first release, FREELANCER “THE TRAVELER SANCTION” is still available digitally from Pro Se. This story will be included in the first new release from BEN Books in 2019. 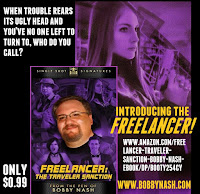 For years, award winning author Bobby Nash has defined action and adventure with his own unique style of storytelling. Now Nash brings both his talent and imagination to his own digital short story creator’s imprint as a part of Pro Se Productions’ Pro Se Single Shot Signature line- From the Pen of Bobby Nash!

“When we developed the Pro Se Single Shot Signature concept,” says Tommy Hancock, “we invited every author involved for a variety of reasons. Bobby Nash was invited for one reason only- because he fit every criterion we were looking for. Known as one of the best and most consistent writers in New Pulp and Genre Fiction, Bobby has tackled multiple genres and has that ability to maintain his own particular voice in any genre and still make each tale different and exciting. Even though Bobby got to choose whether he wanted a series or the creator’s imprint within the Signature line, the From The Pen Of… concept fits Bobby’s diverse storytelling ideally.” 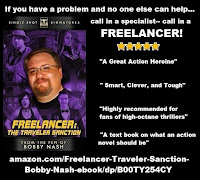 Nash’s Signature imprint debuts with Freelancer-The Traveler Sanction. When trouble rears its ugly head and you’ve no one left to turn to, call in a specialist. It’s time to call in The Freelancer. When the Secretary of Defense’s daughter is kidnapped, the Freelancer is called in to rescue her, but is there something more sinister afoot and will this mysterious heroine figure it out in time?

From the Pen of Bobby Nash- Freelancer: The Traveler Sanction features fantastic cover art and logo design by Jeff Hayes and digital formatting by Russ Anderson. The first short story in Nash’s creator imprint is now available for Kindle here and for most other digital formats here for only 99 cents.

FREELANCER: THE TRAVELER SANCTION is available as an ebook at the following:
Amazon (Kindle)
Smashwords (multiple ebook formats)
Barnes and Noble (Nook)

Read a sample of Freelancer: The Traveler Sanction here--