It is rare to find our very own Bobby Nash at a loss for words, but that’s exactly what happened after the list of winners of the 2013 Pulp Ark Awards was posted at All Pulp last week. "It took a while for the news to sink in, and even now I don’t think it’s really hit me completely yet," Nash said in a statement on his website. "After years as a working writer I can now add the title “Award Winning” before my name, which is pretty darn cool, let me tell you."

The full list of winners is below, including several talented creators, all of whom deserve a hearty congratulations. He also wanted to highlight Bobby's win as well.

Says Bobby of his win:
This was the one that really floored me. I knew I had been nominated, but quite frankly I never expected to win this one. I mean, there were a lot of incredibly talented creators nominated. When I read through the list of winners and saw my name listed here all I could hear was the cartoon-ish sound effect of my jaw hitting the floor like it was made out of lead.

I really don’t know what to say except Thank You to everyone who voted for me. Thank you to everyone who has read one (or more) of my stories. Thank you to the fantastic people I’ve gotten to meet as a result of the books I’ve been privileged to work on. Thank you to the publishers and editors who have hired me and helped me to (hopefully) become a better writer. I’m sure I’ll be able to string together better words once the shock wears off, if it ever will. And finally, thank you for reading through my frantic musings here. My brain is bouncing from one thought to another faster than I can keep up. Might be time to lay off the Mt. Dew for the night, I guess.

The Pulp Ark Awards will be handed out at the Pulp Ark Convention in Springdale Arkansas on the evening of Saturday, April 27, 2013. Unfortunately, I will not be able to attend the entire weekend, but I am planning to be there on Saturday during the day and into the evening.

Thanks again and congratulations to all the winners. 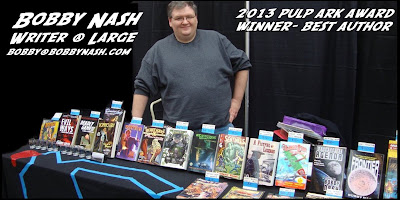 “The voting this year,” Hancock noted, “was exciting since it involved so many different creators, works and publishers.  Six different publishers are represented in the final tally, with both the Best Author and Best New Author winners being writers for various publishers in 2012.”

The Pulp Ark Lifetime Achievement Award, according to Hancock, is still being determined by the select committee chosen to give the honor to an individual who has done considerable work in furthering Pulp in his/her lifetime.

The awards, 8X10 engraved wooden plaques, will be awarded at Pulp Ark 2013 in Springdale Arkansas , the evening of Saturday, April 27, 2013. Hancock stated that all winners as well as nominees are encouraged to attend, but any winners who could not would receive their awards by mail. Pulp Ark thanks all who nominated, all who voted, and congratulations to all the nominees and especially to the winners of the Pulp Ark 2013 Awards!