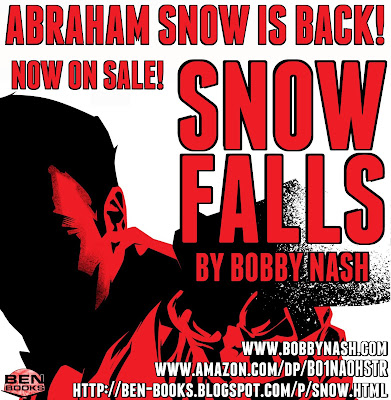 We were so excited for Snow we decided to launch a little early!
SNOW FALLS by Bobby Nash is now available for Kindle. You can find it here.

BEN Books is pleased to announce that it has acquired the rights to award-winning author Bobby Nash’s crime/adventure series, SNOW and has released SNOW FALLS on Kindle ebook at Amazon. SNOW follows the novella-length adventures of former government agent turned do-gooder, Abraham Snow. The first story, SNOW is now available. New adventures begin in 2017 with the eagerly anticipated SNOW STORM in February, followed by SNOW DRIVE a few months later with a print book coming in 2017 as well.

“I am extremely excited to re-launch the SNOW series for 2017,” says Nash of his creation. “This cast of characters in SNOW FALLS has become quite dear to me and readers since the original release. The question I get asked most often is, ‘when’s the next Snow coming out?’ Now, we finally have an answer.”

Artist Dennis Calero’s cover art for Snow Falls will continue to grace the covers to the series.
Learn more about Dennis Calero and his work at http://denniscalero.com

About SNOW FALLS:
Abraham Snow’s career ended with a single shot. Left for dead, the undercover operative barely survived an assassin’s bullet. After a long and painful recovery, Snow retires. He returns home to rest and recuperate only to get swept up in the family business, one just as dangerous as his previous profession. When he thwarts an assassination attempt on a diplomat that endangers his sister, Snow leaps into action to keep his family out of a highly trained killer’s crosshairs.

About SNOW STORM:
Snow’s former partner, Brooks, also a retired operative now working as a p.i., arrives in Atlanta with a problem. His latest case has gotten him into some trouble with some bad people and needs Snow’s help to get out of it before two rival families start a shooting war.

SNOW FALLS is an adrenaline-filled adventure thriller from award-winning author Bobby Nash and the first in a series of action-packed adventures featuring Abraham Snow and friends. Abraham Snow will return in SNOW STORM.

SNOW FALLS is the first book in the continuing adventures of Abraham Snow.
You can find SNOW FALLS here.

Bobby and the BEN Books Crew!