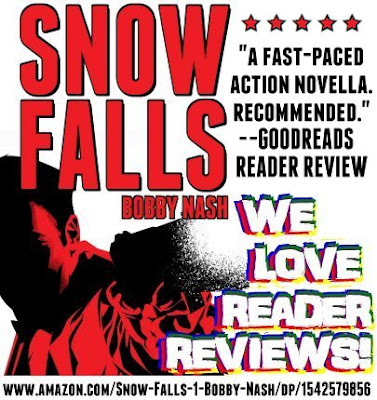 Big Thanks to Darrell Grizzle for his 5 Star review of SNOW FALLS on Goodreads.

A fast-paced action novella that introduces us to Abraham Snow, a spy who tries to retire after recovering from an almost-fatal bullet shot – but circumstances (and his family) conspire to keep him from doing so. Snow’s grandfather Archer Snow is an amazing character, and I hope in future books in this series we’ll see more of his backstory. DragonCon fans will recognize the Atlanta hotel where most of the action takes place. Highly recommended!

Learn More about SNOW FALLS below...
SNOW FALLS
A novella by Bobby Nash

Posted by BobbyNash at 6:47 PM