SNOW DRIVES INTO A 5 STAR REVIEW! 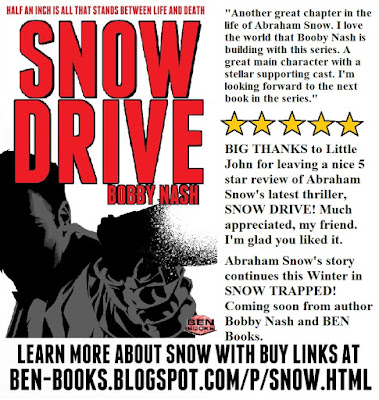 We love reader reviews! Big thanks to Little John for leaving a 5 STAR Amazon review for Abraham Snow's latest thriller, SNOW DRIVE! Thanks for the kind words, pal! They are greatly appreciated!

"Another great chapter in the life of Abraham Snow. I love the world that Booby Nash is building with this series. A great main character with a stellar supporting cast. I'm looking forward to the next book in the series."

Learn more about SNOW here.
“Bobby Nash is my 'go to' guy for thrills and kills on the page, and Snow is why...”
-- Paul Bishop, author of Lie Catchers, Croaker 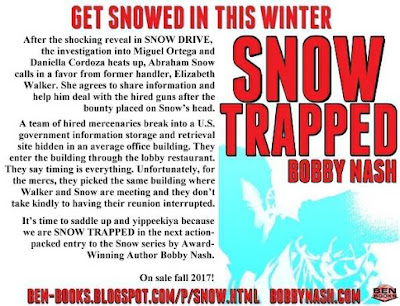 After the shocking reveal at the end of SNOW DRIVE, the investigation into Miguel Ortega and Daniella Cordoza heats up, Abraham Snow calls in a favor from his former handler, Elizabeth Walker. She has agreed to share information on Ortega and Cordoza and to deal with the hired guns after the bounty placed on Snow’s head.A team of hired mercenaries break into a U.S. government information storage and retrieval blacksite hidden in an average office building. They enter the building through the lobby restaurant. They say timing is everything. Unfortunately, for the mercenary team, they picked the same building where Walker and Snow are meeting and they don’t take kindly to having their reunion interrupted.It’s time to saddle up and yippeekiya because we are SNOW TRAPPED in the next action-packed entry to the Snow series by Award-Winning Author Bobby Nash. On sale Winter 2017!