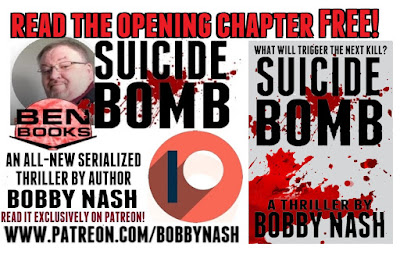 The opening chapter of author Bobby Nash's SUICIDE BOMB has been released to the public on his Patreon page at www.patreon.com/bobbynash. SUICIDE BOMB is a serialized thriller exclusively for Bobby's subscribers on Patreon until it is completed. A new chapter of Suicide Bomb will debut on Tuesdays every 2 weeks beginning with October 2nd, 2018. SUICIDE BOMB is a suspense/thriller. There's a good deal of murder, death, mayhem, and terror taking place in this story. There will even be some cussing and sex too. Please be aware of that going in. If it were a movie, we suspect it would have an R rating. You've been warned. 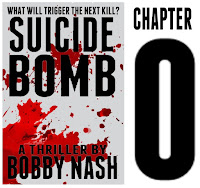 mastermind who has developed a method for turning ordinary people into assassins before killing themselves. Who can you trust when everyone around you could be a killer?

Like all good dealers, Bobby and BEN Books is releasing the first few chapters to the general public for free. "Just trying to get us a few more folks in and grow my Patreon crew," says Nash of the incentive event. "If you know someone who might enjoy SUICIDE BOMB, please send them along." For as little as $1 a month, anyone can join the party at www.patreon.com/bobbynash and take advantage of the author's $1 and $5 subscription plans. After chapter 3, the only way to read SUICIDE BOMB is by subscribing to Patreon. Sit back, have fun, and enjoy the carnage and mayhem of SUICIDE BOMB.

Posted by BobbyNash at 9:10 PM