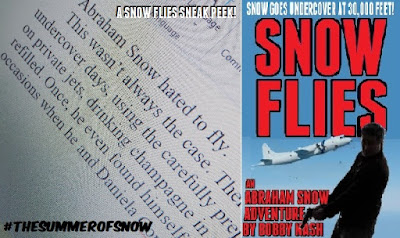 Here's a sneak peek at the latest Abraham Snow adventure in process. This one's called Snow Flies. This story takes place during Snow series 1. Barring any unforeseen incidents, this will premiere in a crime anthology first then be collected in 2020 in a book called Snow Shorts, which will have 3 short stories at roughly 10,000 words each. The three together would be the same size as a regular Snow novella. This gives me some room to let some of Snow's other characters take a turn in the spotlight. I have an idea for a Samson Brooks story in my head at the moment. #TheSummerofSnow

Abraham Snow hated to fly.
This wasn’t always the case. There was a time when he loved air travel. During his undercover days, using the carefully prepared alias James Shepperd, Snow crisscrossed the globe on private jets, drinking champagne in soft leather seats while beautiful women kept his glass refilled. Once, he even found himself inducted into the mile-high club on one of those rare occasions when he and Daniela Cordoza had Miguel Ortega’s plane all to themselves.
Ortega was her boss, and the object of Snow’s undercover operation. Back then, Snow worked for Mother, an unofficial branch of the United States’ war on terror. Snow had been working undercover gigs for Mother for almost ten years before he had to give it up.
More precisely, when his cover was blown and Miguel Ortega shot him and left him for dead on a South American airstrip. It was not the ideal method of retiring, but that was the end result of a bullet missing his heart by only half an inch.
Lying there on that blistering hot tarmac, Snow vaguely recalled an out of body sensation before crashing back to Earth where his bleeding form waited. When his people found him, Snow was strapped to a gurney and flown to the nearest medical facility. He couldn’t say with any certainty that the out of body experience really happened or if it was a fever-induced hallucination, but that moment coupled with lying in the evac helicopter was when his nervousness about heights, most notably flying, began.
Coming soon.Keep watching this space for more details.

Posted by BobbyNash at 3:11 AM