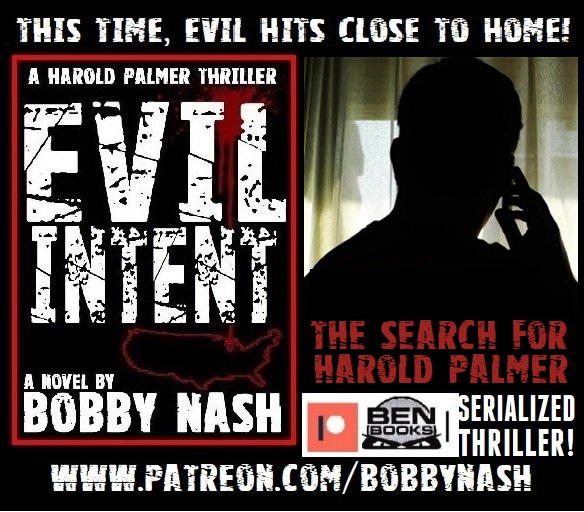 EVIL INTENT returns with an all-new chapter! Author Bobby Nash and BEN Books have released the 25th chapter of the Evil Intent serialized novel exclusively running on Patreon. You can read all of the chapters of Evil Intent now at www.patreon.com/bobbynash.

FBI Agent Harold Palmer has been taken by the enemy and the task force knows they have to find him quickly or else possibly lose him forever. Carter Reidling and Damon Ellis lead the investigation in this tense all-new chapter of Evil Intent. 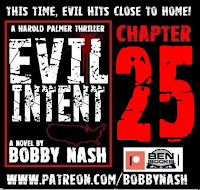 A Patreon exclusive, EVIL INTENT is written by Bobby Nash. This sequel to the hit novel, EVIL WAYS, EVIL INTENT follows FBI Special Agent Harold Palmer and a joint operations task force as they track down the nation's number one domestic threat, a cunning enemy named Donnie Lehmann. He's well-trained, armed, prepared, and is willing to kill to see his goals met. Published by BEN Books. Get in on the action now for as little as $1 a month and be among the first to read the latest Harold Palmer thriller before anyone else.

Catch up on Harold Palmer's first thriller, EVIL WAYS here.
EVIL WAYS is available in hardcover, paperback, and ebook. An audio book is in production.

As always, thanks for your continued support.

Bobby
Posted by BobbyNash at 6:00 AM