Over on Facebook, author Steven Paul Leiva has tagged me in the latest of the writer's chain letter posts. I have been asked to share the first three lines of the first three chapters of a book in progress. I am currently working on Evil Intent so here you go…

Opening (no chapter #)
“I still see him coming.”

“Yes. Walking straight toward me as if it were the most normal thing. Casual.

Ch. 1
Harold Palmer felt a chill as he stepped into the brisk, February evening.

He was relieved to be out of that office. Although he knew better, he could have sworn that the walls had begun to close in on him during the session.

Ch. 2
“We interrupt this program for an important announcement.”

“Good evening ladies and gentlemen,” the man on the television screen said. “I’m Herbert Rothfield for CMN. Earlier this evening we received word that recent peace initiatives in the Middle East have failed.

I'm suppose to tag 10 other writers, but I’ll skip that part. If you’re interested in doing this, go for it.

Also, I couldn't let the opportunity pass to mention that Evil Ways is still on sale in paperback and ebook formats. Here's more about it: 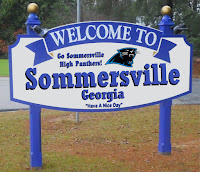 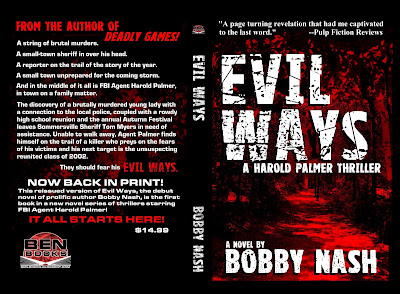 Posted by BobbyNash at 1:58 PM No comments: