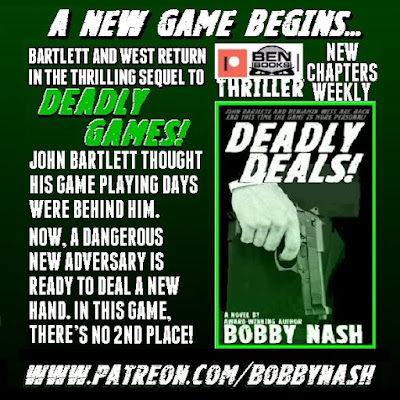 Game On! John Bartlett thought his game playing days were over. He should have known better. When a flamboyant serial killer hits Atlanta, he kickstarts a bold new deadly game that pulls John Bartlett and Benjamin West back into the spotlight and a killer's crosshairs. BEN Books and author Bobby Nash present DEADLY DEALS! an all-new serialized novel beginning later this week at www.patreon.com/bobbynash. Tiers start as low as $1 a month and there are currently two serialized novels running.
Not familiar with Bartlett and West? It's not too late to catch their previous thriller, DEADLY GAMES! The novel is available in paperback, ebook, and audio.
Learn more about DEADLY GAMES! here.
#####

John Bartlett and Benjamin West are back and this time they are drawn into another deadly game against a methodical killer in DEADLY DEALS!

A bold, flamboyant killer stalks the streets of Atlanta. When Bartlett, his partner, and their trainee draw the case, the killer sees an opportunity to raise the stakes by playing a game with the famous detective and his unofficial partner, famed reporter, Benjamin West.

Can Bartlett and West put aside their differences long enough to stop a killer who has set his sights on their loved ones or will fate deal them another ugly hand?

A new deadly game is afoot!