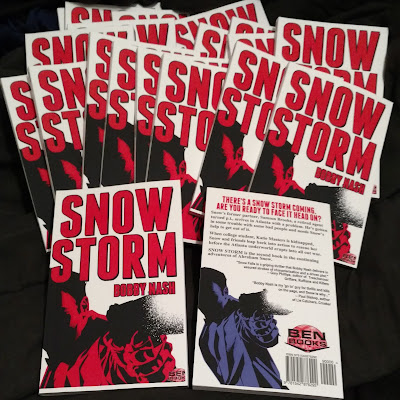 Fresh powder! My paperback copies of Snow Storm arrived yesterday. So excited. Wish they had arrived in time for ACC, but alas, it wasn't meant to be. Get yours today here!

SNOW STORM is the second book in the continuing adventures of Abraham Snow and is now on sale at the following:
Amazon (Kindle)
Amazon (paperback)
Createspace (paperback)

Click Read More... below for information on SNOW FALLS.

SNOW FALLS is the first in a series of novella-length adventures following the exploits of former government agent turned do-gooder, Abraham Snow. Abraham Snow's career ended with a single shot. Left for dead, the undercover operative barely survived an assassin's bullet. After a long and painful recovery, Snow retires. He returns home to rest and recuperate only to get swept up in the family business, one just as dangerous as his previous profession. When he thwarts an assassination attempt on a diplomat that endangers his sister, Snow leaps into action to keep his family out of a highly trained killer's crosshairs.

New adventures continue in 2017 with the book three of the hit series. Look for SNOW DRIVE Summer 2017 and SNOWED IN shortly thereafter. Each novel will be released in paperback and ebook formats.

SNOW STORM cover art is by Dennis Calero. Learn more about his work at http://denniscalero.com

SNOW STORM is an adrenaline-filled adventure thriller from award-winning author Bobby Nash and the second in a series of action-packed adventures featuring Abraham Snow and friends. Abraham Snow will return in SNOW DRIVE.