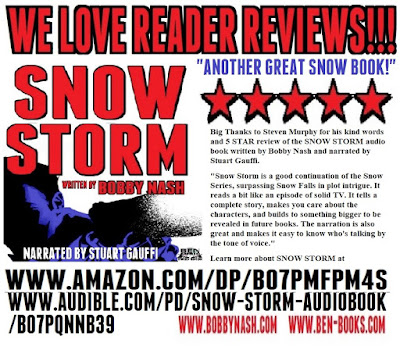 We Love Reader Reviews! A Really BIG Thank You to Steven Murphy for his kind words and 5 STAR Amazon review of the SNOW STORM audio book written by Bobby Nash and narrated by Stuart Gauffi. Published by BEN Books.

"Snow Storm is a good continuation of the Snow Series, surpassing Snow Falls in plot intrigue. It reads a bit like an episode of solid TV. It tells a complete story, makes you care about the characters, and builds to something bigger to be revealed in future books. The narration is also great and makes it easy to know who's talking by the tone of voice."

We're glad you enjoyed it, Steven. Bobby love writing these characters and Stuart is doing a terrific job on the audio. Snow Drive is coming to audio in April. Stay tuned.

Learn more about SNOW STORM at Amazon and Audible. Also available in paperback and ebook. Read it FREE with your Kindle Unlimited subscription.

SNOW STORM is now available for purchase at the following: