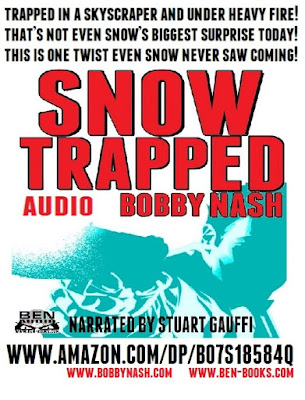 BEN Books and Audible proudly announce the release of SNOW TRAPPED on audio. Written by Bobby Nash and performed by Stuart Gauffi, Snow Trapped is the fourth book in the hit series that follows Abraham Snow on his action-packed adventures while trying to close that one, last elusive case that continues to haunt him. In Snow Trapped, he finds himself one step closer to finding those answers. He also finds even more questions regarding the elusive Miguel Ortega.

"I am thrilled and flattered by the love that Snow and his friends have received," said Bobby Nash of the series. "Our merry cast of characters have struck a chord with readers, especially grandpa Archer Snow. All I can say is a deep thank you. There's more Snow in the forecast."

"I can't imagine anyone else narrating these books than Stuart Gauffi," said Nash. "Stuart brings a rich dynamic to the characters and story that elevates the work. I had a great time listening to this book and I hope readers will as well."

About Snow Drive:
Trapped in a skyscraper and under heavy fire!
That’s not even Snow’s biggest surprise today!
This is one twist he never saw coming!

After a shocking discovery, the investigation into Miguel Ortega and Daniella Cordoza heats up, and Abraham Snow calls in a favor from his former handler, Elizabeth Walker. She has agreed to share information on Ortega and Cordoza, and deal with the hired guns after the bounty placed on Snow’s head.

A team of thieves picks the wrong day to break into the data storage black-site hidden in an average office building. They enter the building through the lobby restaurant. They say timing is everything. Unfortunately for the thieves, they picked the same building where Walker and Snow are meeting, and they don’t take kindly to having their reunion interrupted. It’s time to saddle up and yippeekiya one more time.

Snow Trapped is the fourth book in the continuing adventures of Abraham Snow. 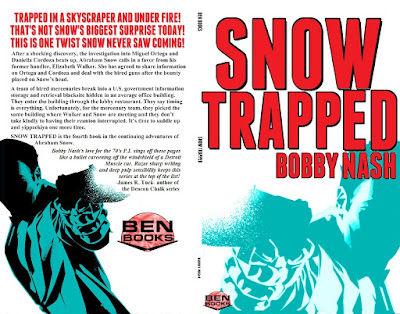 Learn more about SNOW at www.ben-books.com.
Posted by BobbyNash at 3:32 PM