THE PATREON-EXCLUSIVE SERIALIZED NOVELLA CONTINUES - IN THE WIND CHAPTER 13! 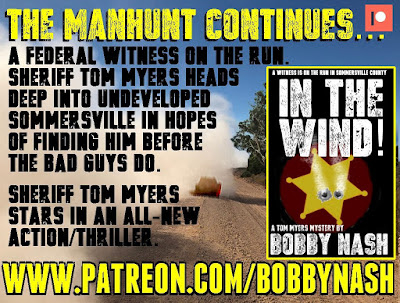 A new chapter of "In The Wind" is now available.
The Manhunt Continues! Missing federal witness, Bates Hewell has escaped capture and fled into undeveloped Sommersville County. Hot on his trail is Sheriff Tom Myers and his deputies. We're only a couple of chapters away from the final showdown of my serialized novella, "In The Wind." This all-new Sheriff Tom Myers crime thriller is now live at www.patreon.com/bobbynash . Subscribe today and get in on the action.

Join the manhunt in the new Patreon-exclusive BEN Books novella, "In The Wind" starring Sheriff Tom Myers and his deputies (as seen in Evil Ways and Deadly Games!), FBI Agent Tom McClellan (as seen in the Snow series), and U.S. Federal Marshal William Teague (who will also appear in the upcoming Evil Intent novel).
The opening chapter of "In The Wind" is FREE to read. Other chapters, like this one, are available only to patrons until it is completed and released by BEN Books in 2020. If you have friends that might enjoy this story, please share chapter 0 with them and invite them to subscribe. You can find Chapter 0 here: https://www.patreon.com/posts/31353775 Please tell your friends.
Just a head's up! IN THE WIND is an adult suspense/thriller. There will be some murder, death, mayhem, and terror taking place in this story. There may even be some cussing and sex too. Please be aware of that going in. If it were a movie, I suspect it would have an R rating, maybe PG-13. You've been warned.

Bobby
Posted by BobbyNash at 11:24 PM