WE LOVE READER REVIEWS! SNOW STAR IS A 5 STAR MYSTERY! 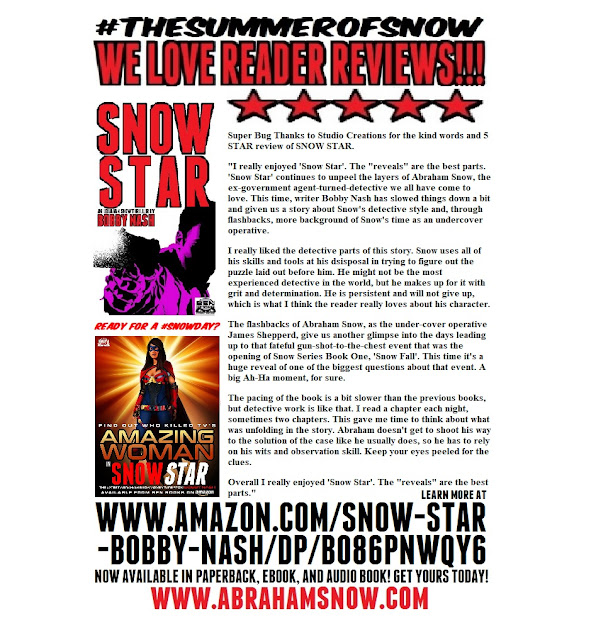 WE LOVE READER REVIEWS! Super Bug Thanks to Studio Creations for the kind words and 5 STAR Amazon review of SNOW STAR. You can read it HERE or below.

"I really enjoyed 'Snow Star'. The "reveals" are the best parts. 'Snow Star' continues to unpeel the layers of Abraham Snow, the ex-government agent-turned-detective we all have come to love. This time, writer Bobby Nash has slowed things down a bit and given us a story about Snow's detective style and, through flashbacks, more background of Snow's time as an undercover operative.

I really liked the detective parts of this story. Snow uses all of his skills and tools at his disposal in trying to figure out the puzzle laid out before him. He might not be the most experienced detective in the world, but he makes up for it with grit and determination. He is persistent and will not give up, which is what I think the reader really loves about his character.

The flashbacks of Abraham Snow, as the under-cover operative James Shepperd, give us another glimpse into the days leading up to that fateful gun-shot-to-the-chest event that was the opening of Snow Series Book One, 'Snow Fall'. This time it's a huge reveal of one of the biggest questions about that event. A big Ah-Ha moment, for sure.

The pacing of the book is a bit slower than the previous books, but detective work is like that. I read a chapter each night, sometimes two chapters. This gave me time to think about what was unfolding in the story. Abraham doesn't get to shoot his way to the solution of the case like he usually does, so he has to rely on his wits and observation skill. Keep your eyes peeled for the clues.

Overall I really enjoyed 'Snow Star'. The "reveals" are the best parts."

Thanks again. I'm glad you enjoyed the mystery. There are more on the way.

Learn more about SNOW at www.abrahamsnow.com

Posted by BobbyNash at 6:04 PM