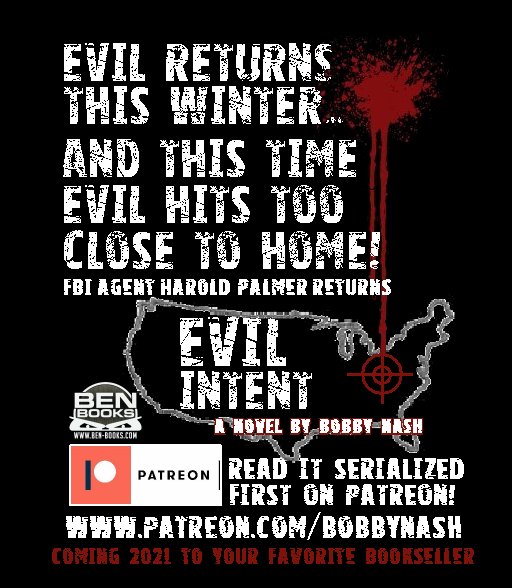 Evil Returns this winter... and this time it hits a little too close to home for FBI Agent Harold Palmer.
At long last, the sequel to Bobby Nash's first published novel, EVIL WAYS is preparing for a 2021 release from BEN Books. To whet your appetite, the author and publisher are releasing EVIL INTENT as a serialized novel while the story is completed and polished exclusively at www.patreon.com/bobbynash. For as low as $1 a month, you can be one of the first to read the long-awaited Evil Ways sequel and offer feedback to the author. What a deal. $5 a month also enrolls you in the ebook of the month club. It all goes to help the author keep writing.
About EVIL INTENT:
FBI Agent Harold Palmer returns!
After the traumatic events in Sommersville, GA (as told in the novel, EVIL WAYS, still on sale), Harold Palmer returns to work. Harold's given a clean bill of health, but he can't shake his final showdown in Sommersville with a maniacal killer.
Donnie Lehmann is one of the FBI's most wanted. A domestic terrorist who seeks to overthrow the United States government, Lehmann and his cult of followers have been in hiding the past couple of years, planning their next attack. The time is now.
When Harold and the Joint Terrorism Task Force raid one of Lehmann's safe houses, the terrorist sets his sites on the Task Force. Before he can go after his biggest target to date, Donnie Lehmann sentences the members of the Task Force to death. Now, the hunters become the hunted.
Can Harold Palmer and his team catch their quarry before he gets them?
Evil Intent is a suspenseful cat and mouse game wrapped in explosive packaging. 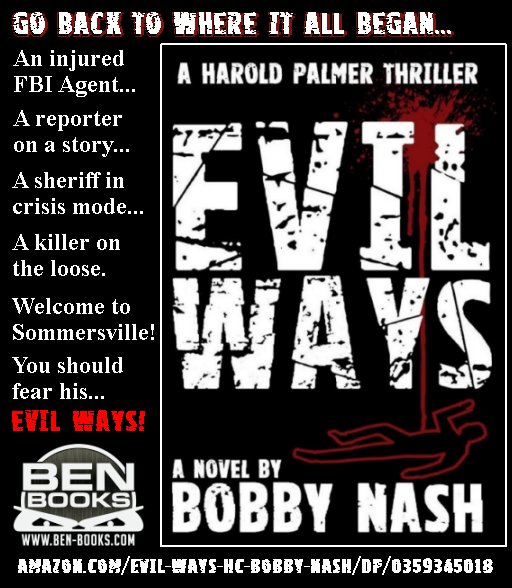 It's never too late to catch up on Harold Palmer's first thriller. EVIL WAYS is available in hardcover, paperback, ebook, and dustjacketed HC. An Evil Ways audio book is currently in production.
Keep watching www.bobbynash.com and www.ben-books.com for more details.
Bobby
Posted by BobbyNash at 8:20 PM