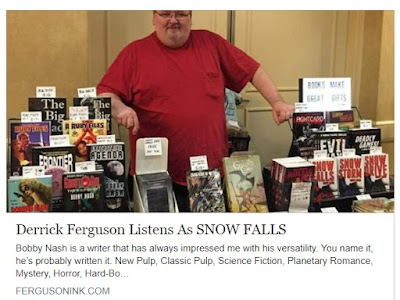 Derrick Ferguson says some nice things about my novel, Snow Falls. You can read it HERE.

Here's a snippet:
Bobby Nash is a writer that has always impressed me with his versatility. You name it, he’s probably written it. New Pulp, Classic Pulp, Science Fiction, Planetary Romance, Mystery, Horror, Hard-Boiled P.I. Thrillers. And in a variety of formats; novels, novellas, comic books, graphic novels. He’s also acted in a number of movies and television shows. Just going over his resume makes me feel like a lazy bum.

Thanks for the kind words, pal.

Posted by BobbyNash at 2:43 AM