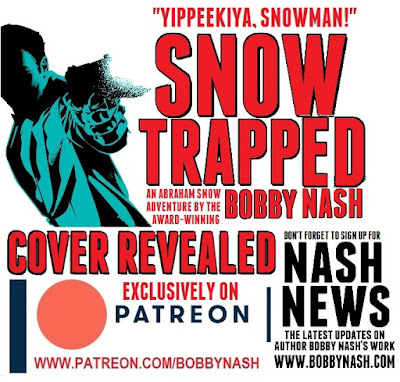 Not an April Fool's Prank!

The final (or at least as final as it gets until the blurbs are added and the file is uploaded to the printer) cover design for SNOW TRAPPED, the 4th book in the Abraham Snow series by Bobby Nash from BEN Books has been revealed exclusively on Patreon. I will be sharing the cover with my Nash News newsletter members later in the week. After that, we'll share it with the world.

SNOW TRAPPED goes on sale May 1, 2018! Look for pre-order information soon. Patrons will receive the ebook before the May 1st premiere as part of their subscription plan. Not a Patron, no worries. Joining up is easy. www.patreon.com/bobbynash has all the details.

Signing up for NASH NEWS is easy too. Just head on over to www.subscribepage.com/NashNews and sign up.
Nash News subscribers will receive a special gift in the May newsletter. Sign up today!

ABOUT SNOWED TRAPPED:
After the shocking reveal at the end of SNOW DRIVE, the investigation into Miguel Ortega and Daniella Cordoza heats up, Abraham Snow calls in a favor from his former handler, Elizabeth Walker. She has agreed to share information on Ortega and Cordoza and to deal with the hired guns after the bounty placed on Snow’s head.

A team of hired mercenaries break into an information storage and retrieval blacksite hidden in an average office building. They enter the building through the lobby restaurant. They say timing is everything. Unfortunately, for the mercenary team, they picked the same building where Walker and Snow are meeting and they don’t take kindly to having their reunion interrupted.

It’s time to saddle up and yippeekiya because we are SNOW TRAPPED in the next action-packed entry to the Snow series by Award-Winning Author Bobby Nash. On sale May 1, 2018!

Click Read More... for more information on the SNOW series.
“Bobby Nash is my 'go to' guy for thrills and kills on the page, and Snow is why...”
-- Paul Bishop, author of Lie Catchers, Croaker