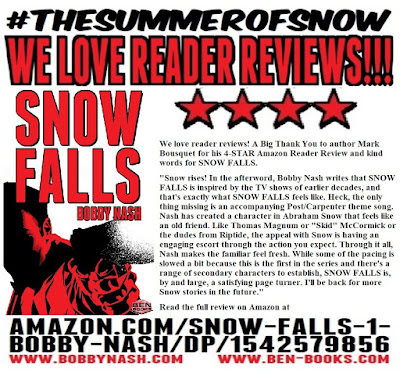 We love reader reviews! A Big #TheSummerofSnow thank you to author Mark Bousquet for his 4-STAR Amazon Reader Review and kind words for SNOW FALLS.

"Snow rises! In the afterword, Bobby Nash writes that SNOW FALLS is inspired by the TV shows of earlier decades, and that's exactly what SNOW FALLS feels like. Heck, the only thing missing is an accompanying Post/Carpenter theme song. Nash has created a character in Abraham Snow that feels like an old friend. Like Thomas Magnum or "Skid" McCormick or the dudes from Riptide, the appeal with Snow is having an engaging escort through the action you expect. Through it all, Nash makes the familiar feel fresh. While some of the pacing is slowed a bit because this is the first in the series and there's a range of secondary characters to establish, SNOW FALLS is, by and large, a satisfying page turner. I'll be back for more Snow stories in the future."

SNOW FALLS is available in paperback, ebook, audio, and hardcover (in the SNOW Series 1, Vol. 1 collection). Read it FREE with Kindle Unlimited. Sign up for Audible and get two FREE audio downloads. Learn more about Snow at www.ben-books.com or below.