AFTER SUICIDE BOMB WRAPS UP... 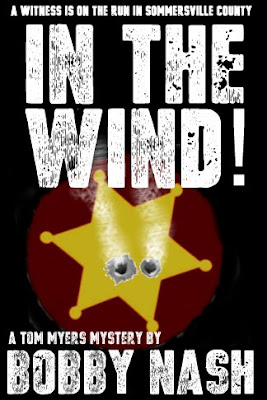 I have been planning a series of novellas (similar in size to the Snow books) featuring Sommersville, Georgia Sheriff Tom Myers, who some of you will remember from Evil Ways and Deadly Games! (and the upcoming Evil Intent). Although Myers was involved in those three stories, neither he nor his deputies were the main focus.

That will change as I write IN THE WIND - A SHERIFF TOM MYERS MYSTERY (Book 1) as a weekly serialized novel starting a week or two after the completion of Suicide Bomb. Once I know when that will be, exactly, I will let everyone know. There are already a couple of chapters written and I hope to pull ahead a bit before I start posting.

Doing a serialized novella sounds like a better idea to me than a full-length novel so we can reach the end in 4 or 5 months as opposed to almost 2 years as with Suicide Bomb. This will also allow me to keep the content fresh. Here's the pitch for IN THE WIND - A SHERIFF TOM MYERS MYSTERY: A secret federal safe house in Sommersville, Georgia is hit and a federal witness flees custody. The authorities descend on the county in search of their

prize witness. They are convinced he is hiding out in the wilds of Sommersville. Can local sheriff, Tom Myers find him and bring him in before hired killers do?

The cover above is something I threw together as a placeholder. I will probably use it, or something similar during the writing phase like I do with Suicide Bomb. It is not the final cover.

Not a patron? This will be a great jumping on point.

More news as it develops.

Posted by BobbyNash at 4:51 AM