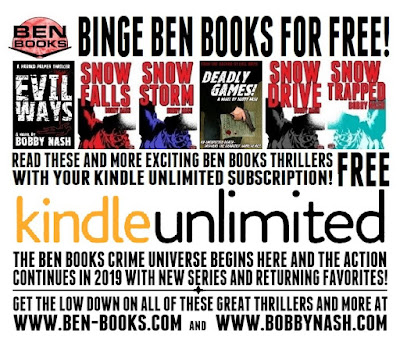 Binge BEN Books Thrillers FREE! Ben Books' Crime Universe begins here! All titles are available in paperback and ebook for your Kindle. You can read these, and all BEN Books releases FREE with your Kindle Unlimited subscription! What a great deal!

Now's the best time to catch up on these BEN Books thrillers by award-winning author Bobby Nash before the next batch of stories debut in 2019 as new series and returning favorites head your way with new releases! Check out these thrillers and more at BEN Books new web address, www.ben-books.com!

EVILS WAYS
FBI Agent Harold Palmer teams with a small town sheriff and a local reporter, his brother, to stop a killer before he can kill a group of childhood friends in town for a reunion in this exciting mystery suspense thriller. Read it on Kindle Unlimited HERE.

DEADLY GAMES!
Police Detective John Bartlett and reporter Benjamin West must put aside their differences and work together when they are targeted by a vindictive criminal seeking revenge from beyond the grave in this award-nominated action thriller. Read it on Kindle Unlimited HERE.

SNOW FALLS
Abraham Snow's old life ended with a bullet when his undercover alias was blown. Snow returns home to recuperate and to try and reintegrate himself into the world he left over a decade earlier and reconnect with family and friends. Snow quickly learns that things in the normal every day world can be just as deadly as his undercover life when he gets between a visiting dignitary and a sniper's bullet. Read it on Kindle Unlimited HERE.

SNOW STORM
While Abraham Snow continues his search for the man who shot him, Samson Brooks, an old friend comes to town. He's in trouble and needs Snow's help to rescue a kidnapped college student and prevent a bloody mob massacre. Read it on Kindle Unlimited HERE.

SNOW DRIVE
Abraham Snow's first real case as a private investigator has him joining his grandfather's security firm to investigate alleged sabotage at the race track. Someone is trying to keep the Chambers Racing Team out of the big race. Snow has to find out who and stop them. Meanwhile, an old enemy returns and Snow finds himself in the cross hairs of a professional killer. 2018 PULP FACTORY AWARD NOMINEE: BEST PULP NOVEL! Read it on Kindle Unlimited HERE.

SNOW TRAPPED
The investigation into Miguel Ortega and Daniella Cordoza heats up as Abraham Snow calls in a favor from his former handler, Elizabeth Walker. Their meeting doesn't go as planned when a team of thieves break into the building that holds all of Snow's answers. Read it on Kindle Unlimited HERE.

Posted by BobbyNash at 5:25 PM