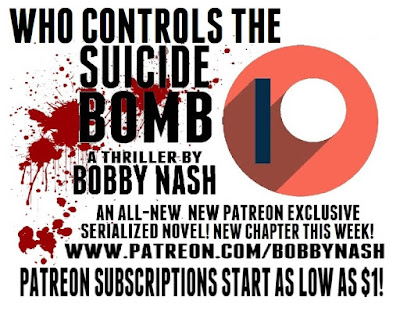 Patreon Exclusive Serialized Novel, Suicide Bomb - New Chapter Released at www.patreon.com/bobbynash! In this newly released chapter, we travel back in time a few days to see The Controller's plans in action. Malcolm Washington was not the first guinea pig used by The Controller. This is one of my favorite kills from the novel.

The story so far... A methodical killer known only as The Controller has nearly perfected a procedure that can turn anyone into an assassin from afar. After carrying out the pre-planted assignment, the assassin then kills themselves. The Controller has nearly perfected this perfect weapon. DC Metro Homicide Detective Catherine Jackson has been assigned a case that puts her on The Controller's radar and he has become fascinated with her. How will Secret Service Agent Samantha Patterson fit into this deadly game?


Subscribe to Bobby Nash's Patreon Subscriber's Club at www.patreon.com/bobbynash and help support the author, read the serialized novel, and enjoy special gifts each and every month. Subscriptions start as low as $1 a month. $5 a month also gets you an ebook release each month and early access to new releases and other goodies. I hope you'll join us. www.patreon.com/bobbynash

Bobby
Posted by BobbyNash at 5:37 PM